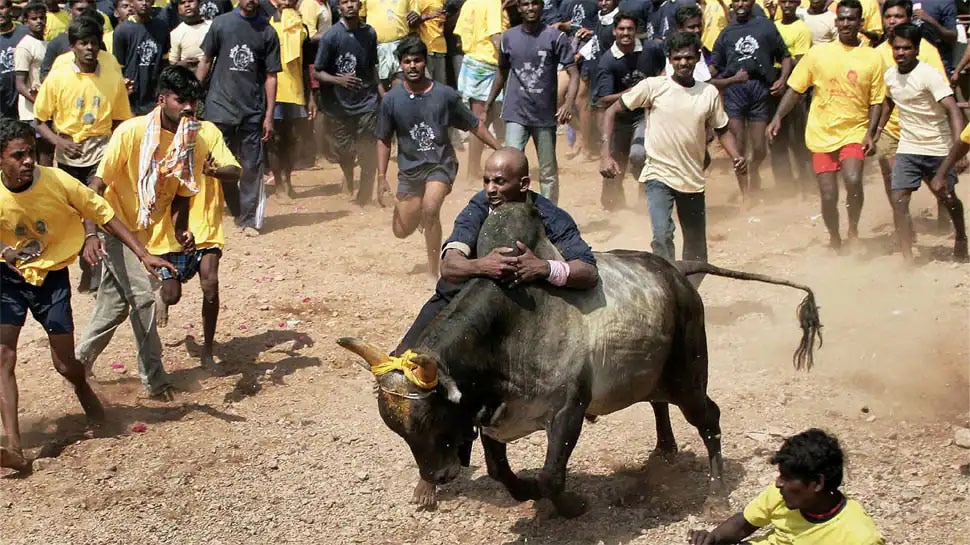 Chennai: Jallikattu competitions were organized in various villages of Vellore district on Pongal with the permission of Tamil Nadu government. During this, such a big incident happened, after which there was a ruckus.

Bulls race in the village on Jallikattu

According to the information, bullock race was organized on Jallikattu in Moonchurpattu village near Vellore. Hundreds of people had gathered there to see him. At the same time, a powerful bull running in the competition passed by the crowd and passed away after hitting a person. After he left, people picked up the person and did it to the side.

The bull climbed on top of the person during Jallikattu, you will be surprised to see the video#Jallikattu #SocialMedia #ViralVideo

In the second incident, the rope of a bull running at high speed got stuck in the neck of a young man standing on the way, due to which he also dragged along with the bull for a long distance. Later, somehow the rope was cut and separated and the young man was picked up. Seeing this incident, the lives of the people present in the competition dried up.

Also read- DNA ANALYSIS: Politics on Jallikattu, why did Rahul Gandhi forget his own party’s decision?

A heavy bull ran over the spectator

Similarly, a bullfight was organized in Panamadangi village near Latheri in Vellore. Hundreds of people had gathered there to see that fight. At the same time, a bull spectator involved in the bullfight ran fast towards Digha and trampled a young man standing there.

Youth dies due to bull crush

Let us inform that on Friday, the first day of Pongal, the first competition of Jalaktu was organized in Avaniapuram. In which about 641 bulls took part. An 18-year-old spectator was crushed to death by a bull in Avaniapuram.

In view of this, elaborate security arrangements have been made for the Jalakattu organized in Palamedu and police have been deployed. For the first time, the district administration has made arrangements for live streaming of the event.